Why Do Cats Sleep So Much? 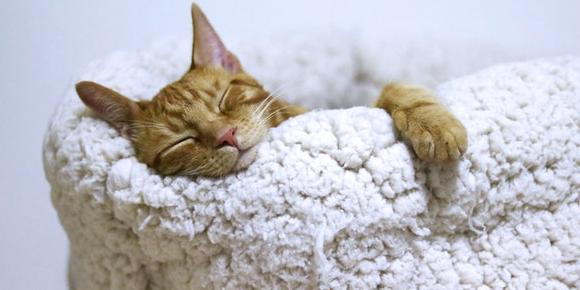 If sleeping was an Olympic sport, your cat would probably bring home the gold medal. World Sleep Day is coming up on March 13, which got us thinking about how much cats actually sleep in a day. Cats sleep an average of 15 hours per day. However, they can sleep as much as 20 hours within a 24-hour period. They are basically sleeping most of the day away, but do you know why?

Just like humans, cats vary in the amount of sleep they need. In each circumstance, it will depend on age, health, mood, and more.

How Much Do Cats Sleep?
Cats do the majority of their sleeping during the day, since they are most active overnight. If you've wondered why that is, the answer lies in their physiology.

Since cats are natural predators, their brains and bodies are made to have them hunting mostly at night, when their excellent eyesight can help them catch prey while staying undetected.

Though domesticated, our kitties still display many behaviors found in wild cats such as lions and tigers. Since hunting prey takes lots of energy, cats sleep as much as possible so they will have the energy needed to pounce on their prey (or cat toy).

How Much Sleep Do Cats Really Need?
Cats sleep so much of the day because they’re biologically programmed to do so. If your cat is sleeping 15 hours per day, then you can safely assume that she needs 15 hours per day. If you’re worried because she’s suddenly sleeping more than usual, or because she’s lethargic when she’s actually awake, that’s another thing. If something like this is bothering you, definitely don’t delay talking to your vet.

Cats do go through cycles in the amount they sleep, though. As kittens, they’ll probably sleep a LOT of the day. When they’re in their “adolescent” years, they may suddenly develop bizarre sleeping habits that have them bouncing about the house at all hours of the day (and night). As an adult, you’d expect a fairly regular schedule (which you can help set up as a habit), of anywhere between 12 and 20 hours depending on the day and the cat. Seniors may have more trouble moving and may start to slow down, so you would expect to see their sleep needs fall on the higher end of that scale.

If you think your cat is always sound asleep, think again. After all, there's a reason why they call it a "catnap." According to researchers, only about 25 percent of a cat's sleep is actually deep sleep, while the other 75 percent of the time they are lightly snoozing.

What if My Cat's Sleeping Habits Change?
If you start to notice sudden changes in your cat's sleeping habits, it may be a good idea to have them checked over by your veterinarian. For example, if they start sleeping far more or much less than before, it could signal they are in pain, are having gastrointestinal issues, or are even depressed.