How to Tell if Your Cat is Unhappy 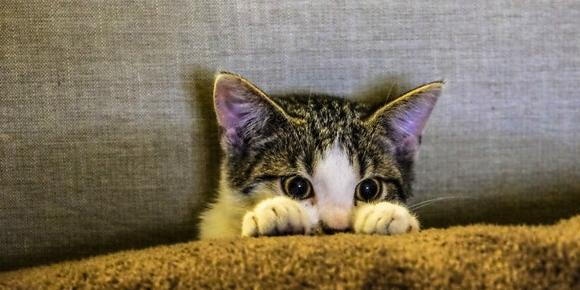 September is Happy Cat Month which is why we wanted to discuss the signs of an unhappy cat. They may not be able to say “I’m unhappy,” but they are communicating. We just have to learn to recognize their behaviors. These are the signs to look for in your cat that may be cause for concern.

Hiding
If a cat becomes significantly more reclusive than usual, it may be a sign that they’re feeling down. Unhappy cats are generally more fearful, and they may hide to soothe and protect themselves. Hiding can also indicate that a cat isn’t interested in activities that they usually enjoy, such as playing with toys or cuddling up with their humans.

Change in Sleeping Habits
Cats sleep an average of 12 to 16 hours every day. However, if you notice they’re sleeping much more than usual or much less than usual, it could be an indication that they’re unhappy or unwell. Also, a change in the location where they normally sleep can be a clue that they’re not feeling like themselves.

Body Language
If you notice that a cat’s ears are back, their fur is standing on end, or their tail is tucked instead of raised high, they likely aren’t feeling their best. It’s common for cats to tense up while they’re playing, but a happy and healthy cat will relax afterward.

Change in Eating Habits
If a cat is unhappy, they may suddenly stop eating. They may even turn down their favorite treats. While less common, unhappy cats may also increase their food intake as a way to self-soothe. Regardless of whether they’re eating more or less, a change in appetite can indicate that cats aren’t feeling like their normal happy selves.

Let's take a minute to recognize these signs so that we can continue to have a happy cat. If you ever have a question or become concerned about your pet, please call our office at (602) 559-5500 to speak with the vet.